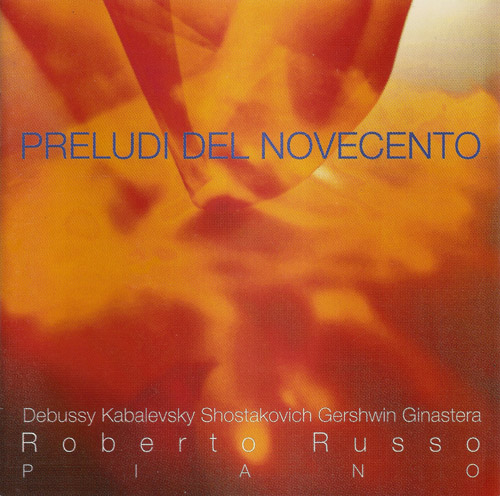 “This beautiful CD recorded by Roberto Russo gives us a significant music anthology that, starting from Debussy’s Preludes, comes up to some pieces composed by Russo himself. The choice is precious…” – “The only critic that once could be done to music like that written by Roberto Russo is to be tonal. But as we left – although hardly – the dictates of Darmstadt and its “little babies” (thankfully a dying breed, despite of some authoritative nostalgia of old caryatids and periodic flashbacks of famous interpreters), also tonality is welcome, or even the C major when a composer has something to say. Russo’s pieces reveal a true sensibility, knowledge of the instrument and great skills as a composer. What do You want more? Skills that the young composer-performer also demonstrates on the executive side, in the definition of “character” of these pages, so different from one another.”
(Riccardo Risaliti – Florence, Italy – “CD Classica” – 2003)


“I have listened very carefully to your CD performance of my father’s three jazz preludes, and I feel that you have truly captured the spirit of what my father had in mind when he wrote it in l926″
(Alan Gershwin, composer – New York (USA) – December the 2nd, 2003)


“This is a wonderful collection of Preludes. Russo performs with careful attention to style and character as established by each composer. The listener enjoys a fresh sound and individual approach to every set of pieces in the collection. It’s a charming and engaging, at once accessible and innovative. The Debussy Preludes are beautifully played, especially the mournful second Prelude. The Kabalevsky Preludes are not frequently heard and deserve more attention. The harmonies are complex, and Russo’s voicing is eloquent. The Shostakovich Preludes are passionately performed. Personal character traits of the composer are revealed, and at least one of the Preludes (the fifth) from this set is a predictor of even greater things to come from the pen of the composer. In the Gershwin Preludes, Russo performs musically and with great energy. This reviewer particularly enjoyed the performance of the third Prelude in the set.
The Ginastera Preludes are played with clarity, vigor and sensitivity. Russo masterfully captures the mood of each Prelude. The Preludes by Roberto Russo himself are among this reviewer’s favorites.
–The first Prelude is poignant and simple, relying on an old-world compositional technique: counterpoint. The combination of contrapuntal treatment and 21st century harmonic language is what makes this piece most interesting.
–The fifth Prelude features a rhythmic/melodic motive that permeates the piece, providing coherence. It is masterfully integrated into the texture, and Russo’s execution is impressive.
–The eighth Prelude is an homage to Dmitri Shostakovich. It’s tightly woven, jaunty and playful. As is the case in each piece on the CD, Russo’s performance here is expressive and engaging.
It is in this final set that Russo’s own style and command of the instrument take center stage.”
(Terrie L Manno, Professor of Music/Piano – Minnesota State University Moorhead, June the 24, 2003)


“The new CD by Roberto Russo is a splendid contribution, one of the most thoughtful and evocative performances that I have heard for some time. The music breathes easily, with a sense of time and space that gives a poetic nature to many of the preludes. The Russo pieces themselves are a fine addition to the repertoire, linking modern and traditional values in the most acceptable way. I look forward very much to the next CD”
(Michael Stimpson, composer – Southampton, England – December the 3rd, 2002)


“…but also as a composer Roberto Russo presents here nine examples of Prelude: a very unusual surprise… Some of them really extraordinary. This is a CD nobody should miss.”
(Vassili D’Arno – “Strumenti e Musica” – Ancona, Italy – December 2002)


“…Perhaps the word ‘Magnifico’ would describe my general impression of his talents as a performing artist, composer and pianist… He doesn’t represent their music as his interpretation, but let them speak for themselves… This, in my humble opinion, is the sign of a great performer!”
(Laszlo Gati, conductor – Vancouver, Canada – December the 9th, 2002)